Do More, Not Less, With a Budget If you ask a friend if they’d rather spend an afternoon creating a budget or go to the dentist to get teeth yanked, they’d probably head for the dentist’s chair. And that’s a problem.

The word budget has gotten a bad rap, and it’s a shame because it’s the most useful technique to get your money under control.

Today we’ll discuss what a budget is, budgeting misconceptions, and how budgets allow you to do more, not less!

What is a Budget?

A budget sounds intimidating. Like the essay, you procrastinated in high school because you never got around to reading To Kill a Mockingbird.

In reality, however, a budget is nothing more than a plan — a plan for your money. If you have a two-hour break at work and you decide how to spend your time, you’re budgeting your time. It’s the same concept.

It’s simple—a budget is a plan for your money. It’s the process you go through to decide how, when, and on what to spend your money.

Not so complicated, right?

Now that we are all on the same page about the fact that a budget is little more than a plan for your money, we need to understand why budgets matter.

Without a budget, you’re throwing in the towel. You’re resigning yourself to feel out of control and let luck guide your financial life.

Related: You Need a Budget: 6 Reasons to Get Started Today

This quote is crucial because money is not a part of your life that you want to fail. Financial failure can result in your family not having access to healthcare, healthy food, safe shelter, educational and professional opportunities, and a host of other necessities.

So yes, budgets do matter—a lot.

Budgets are similar to diets in the sense they become the scapegoat when the person doing them doesn’t succeed.

Think of your Uncle Larry, who is always on a diet but never seems to lose a pound. Even though he cut cheeseburgers out of his routine, he was still consuming two liters of Dr. Pepper and a bag of chips every day. Yet when you ask him why he hasn’t lost any weight, he will say the diet sucks. It’s never Uncle Larry’s fault.

I see this all of the time with budgeting. You wouldn’t believe how many times I’ve heard people tell me, “budgets don’t work for me,” or “budgets only work for people with high incomes.”

Or you’d believe it since you might feel the same way.

You only need to budget if you live paycheck to paycheck

Another misconception about budgeting is you only need to budget if you live paycheck to paycheck.

Let’s take a step back. That’s like saying only people who are hoping to lose weight should eat healthily and exercise. However, when you go to the gym, who do you see there? Healthy, fit people who want to stay in shape and be healthy.

If you take a poll of people who have been budgeting for years, you’d be surprised about how much money they have saved up in the bank. Making a budget in one form or another is a life-long habit. Budgeting isn’t only for those who don’t have enough money.

There’s no point to budgeting if you’re broke

Another misconception is if you’re broke or earn a low income, there’s no point in budgeting. This couldn’t be further from the truth! If you’re always running out of money, it’s a sign that a budget could help you.

Molly Lopez, a long-time budgeter in California said, “I created my first budget when I was in college earning $12,000 a year while working part-time. It seemed kind of silly to budget when I never had any money left over, but 10 years later, I have a nest-egg worth $250,000 and I attribute it to the discipline I learned from budgeting early.”

You Lose Control When You Don’t Budget

We all know the feeling when you get your paycheck, and it feels like you’ll be able to get groceries, go out on the town, and even enjoy a nice meal at a restaurant. And then you blink, it feels like you have nothing left before you got to spend any of it.

Or you aren’t even living from paycheck to paycheck, but you’re still not sure where all the money you had was spent. I mean, you have the credit card bills and receipts to prove it was spent, but it doesn’t seem to add up.

When you don’t budget, you’re not deciding how and when you’re spending money. You aren’t in control of your money.

It’s pretty scary to not feel in control when you have loved ones to worry about, student loans to repay and a mortgage payment due every month.

Related: Is Amazon wrecking your budget? Here’s how Qube helps you stop overspending on Amazon.

Budgeting Allows You To Do Way More

There’s one aspect of budgeting that’s even more powerful than getting your money under control. And that’s giving you more happiness, more life, and more memories.

You may think of a budget as a pair of handcuffs holding you back. When in reality, a budget acts more like a pair of wings to let you enjoy what you love.

A budget permits you to spend on what you prioritize. It liberates you. No more guilt associated with spending, because you have a plan. The guilt you feel comes from spending while you feel out of control. Those days are over.

You can afford the items you want most, but you can’t afford to have everything in the world.

Related: 6 Causes of Overspending That Are Holding You Back

If you’ve always dreamed of taking your family to Hawaii for vacation, a budget will help you get there. As part of your monthly plan, you’ll set money aside for the future Hawaiian vacation. Does that mean you might not be able to fit random nights out at restaurants into your budget? Probably, but you’ll prioritize a life-long dream over a casual night out that you’ll forget about in a few months.

My favorite part of my budget is it includes money ($200) for me to spend any way I want. No questions asked. Before having a budget, I would have never felt comfortable spending money on myself. Now, it’s this luxury I have given myself and helps keep me excited to budget the next month.

Read: How to Get Your Spouse On Board With Budgeting

The best part is I’m saving even more of my money than ever before.

Prioritize What Adds Value to Your Life

As you can see, the key ingredient when it comes to budgeting is prioritization. This is important. Here’s an example.

When I worked on Wall Street nearly a decade ago, an older colleague talked about how nothing mattered more to him than his wife and their newborn daughter. However, at the end of long workdays, he would always join the junior members of the team at a bar for drinks. The next morning he’d complain he wished he could spend more time with his wife and daughter.

He could have spent many many more hours at home with his family instead of at the bar with us, but he wasn’t prioritizing. Either that or his wife and daughter weren’t as important to him as he led me to believe.

What’s important can be pushed aside if we don’t take the time to think about them.

When it comes to money, another analogy might be a person who loves to try new restaurants regularly. They don’t care about their commute to work or where they live in general. Yet, they live in an apartment in the most expensive part of town. They don’t realize it, but they are prioritizing residing in a lovely apartment over trying new restaurants (which they love to do) since that’s where the majority of their money is going.

Thankfully, once this person (who I know in real life) started budgeting, they realized they’d be much happier by lowering their living expenses and spending more money doing activities they enjoyed.

In other words, a budget is nothing more than an exercise in financial prioritization. Or figuring out what’s most important to you.

Qube Money Is Not Your Grandma’s Budget

Qube Money is the perfect solution for anyone looking to start planning where their money will go. Not only because the app is easy to use, but because it has an additional layer of accountability (the accompanying card for spending) to remind you of your priorities and help you stick with it.

The days of budgeting taking place in a stodgy notebook or spreadsheet are over. 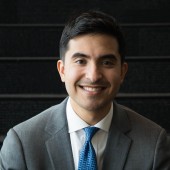 Camilo Maldonado is Co-Founder of The Finance Twins, a personal finance site and blog that helps thousands of readers budget, invest, refinance their loans, build their credit, and get their money problems under control. He also runs ContactsCompare.com, a site which helps you find the lowest prices on your favorite contact lenses. He holds an M.B.A. from Harvard and a B.S. in Finance from the Wharton School of the University of Pennsylvania.